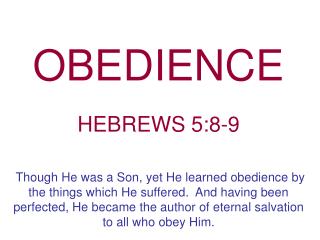 OBEDIENCE HEBREWS 5:8-9. Though He was a Son, yet He learned obedience by the things which He suffered. And having been perfected, He became the author of eternal salvation to all who obey Him.

Two Are Dying Beside Jesus - . what would change drastically in just a few hours!. “how did the thief on the cross get

The Great Salvation - . much of this lesson taken from a sermon by foy l. smith. church of christ at medina july 20 th ,

Expecting the Impossible - . impossible: god to lie. (titus 1:2) in hope of eternal life which god, who cannot lie,

Matthew 16:13-20 - . men did not understand who jesus was. they misunderstood his identity as the son of god

THE GREAT COMMISSION IN TEN PARTS - . part six: the act (of obedience): baptism. the five accounts of the great

Does It Make Any Difference? - . is the church of christ really all that different from other churches?. aren’t all

Obedience - . hereby we know. learned obedience by his suffering, heb. 5:8-9 author of eternal salvation to all who obey