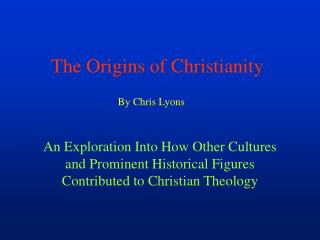 CH 510 – The History of Christianity 1 - . unit one – early christianity slides based in part on the story of

DBT and Christianity - . side by side parallels: corollaries &amp; comparisons of christian values &amp; concepts

Christianity Under the Siege of Neopaganism - . four myths evangelicals love . myth # 1: music is neutral and amoral

CHRISTIANITY - . roman catholicism. sacraments. a sacrament is an efficacious sign of grace , instituted by christ and

Chapter 27 Prokaryotes and the Origins of Metabolic Diversity - . i.  the world of prokaryotes