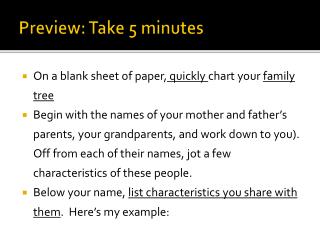 Preview: Take 5 minutes. On a blank sheet of paper, quickly chart your family tree B egin with the names of your mother and father’s parents, your grandparents, and work down to you). Off from each of their names, jot a few characteristics of these people.

Module 2A: Unit 1: Lesson 12 - . analyzing how literature draws on themes from the bible and world religions: the golden

5 minutes - Bellwork. what is the best invention ever made? how has it impacted your life for the better?. 5 minutes.

Warm Up – Sequencing Practice - . arrange the cards in sequential order. have teacher check. match the date to the

Activity (5 minutes) - . write : your speech topic is the barack obama write an…. attention getter (1 of 8 types),

Warm Up (5 Minutes) - . graph the following points/lines… and their respective transformations:. (-2,-2); translated:

Module 2A: Unit 2: Lesson 1 - . making character inferences: analyzing how words and actions reveal character in to

DO NOW: 10 Minutes - . download this ppt from mr. m’s blog. the next slide shows an example of a “report card”