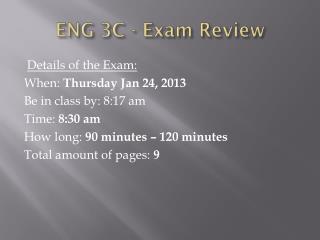 Unit 3C: Stoichiometry Review - . the mole . the mole is the si unit for “amount of substance.”. atoms are so small,

ENG 3UI Final Exam - . the overview for your 3u exam with mr. graham!. when and where?. your exam is scheduled on the

Exam Review - . question 1. minimum wage is raised in the us. show the effect of this on a correctly labeled graph. be