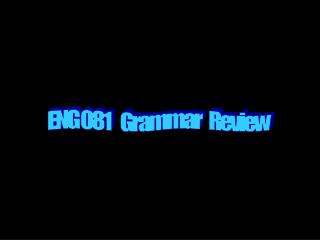 Eng. 081: Review of Paragraph Requirements and First Assignment - All the paragraphs you submit to me this semester must

Grammar Review - . subjects, predicates, and parts of speech. what is the proper noun in the sentence?. mrs. smondrowski

Grammar Review - . there is s copy of this ppt on the homework website which you can download or print for review

Grammar Review! - L.8.1- a. explain the function of verbals (gerunds, participles, infinitives) b. form and use verbs in

Grammar Review - Only in grammar can you be more than perfect.  ~william safire . grammar

Grammar Review! - . my brother hoping to get a job requested an interview. the girl who won third place is my teammate. .

Grammar Review - . comma splice: “the attempt to join two independent clauses with a comma, but without a