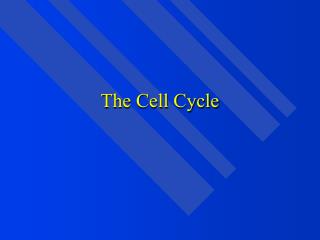 Chapter 18: Genetics of Cancer and Cell-Cycle Regulation - . what is cancer?. large number of complex diseases behave

Objectives: I CAN… - . □ sequence the events of the cell cycle. □ relate the function of a cell to its organization

p53 and Control of the Cell Cycle - . learning objectives. conclude the role of p53 in preserving genome stability