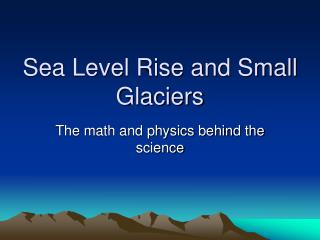 Sea Level Rise and Small Glaciers. The math and physics behind the science. The Math is There. See many claims about climate change. Rarely get to see the derivations leading to those claims. This lecture will show the math that lets us predict sea-level rise due to melting mountain glaciers. Sea Level Rise Study - . background. tbrpc was contracted by swfrpc, through a grant from the us epa to participate in

Session 10: Sea Level Rise - . this session will introduce the basic natural processes and potential impacts of the