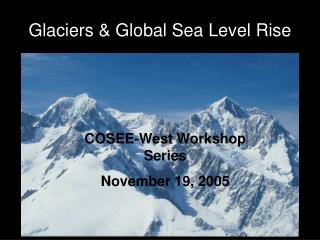 EARTH SCIENCE CHAPTER 17 - . glaciers. glaciers.  chapter 17 glaciers i. what is a glacier? mass of moving ice

Can we imagine a World without Ice? Climate change: Impacts on glaciers - . helgi björnsson institute of earth sciences,

What everyone should know about “Global Warming” &amp; Sea-Level Rise - . by dave burton member, north carolina

Glaciers &amp; The Wind - . 23.4. describe the formation and movement of glaciers. identify features formed by

Glaciers (Part I) - . what is a glacier? where are glaciers found? what is climate effect on glaciers?. what is a

Erosion and Deposition - . glaciers. glaciers. geologists define a glacier as any large mass of ice that moves slowly

Glaciers - . by: naomi cary &amp; elizabeth baldwin. what are

Glaciers - . ch 13. introduction. glaciers are masses of ice which move over land by plastic flow and basal slip.

Glaciers and Glaciation Physical Geology, Chapter 22 - . glaciers and earth’s systems. a glacier is a large,

Glaciers - . quiz. percentage of earth’s surface covered by glaciers today. 10%. but, much more extensive in the