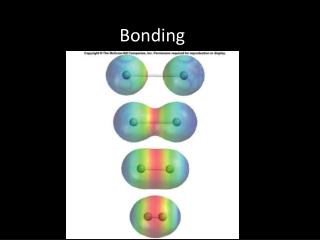 Bonding. Topics for study. 4.1 Ionic Bonding 4.2 Covalent Bonding 4.3 Intermolecular Forces 4.4 Metallic Bonding 4.5 Physical Properties. It will help you a lot if you read through your notes from IGCSE. There seems like a lot in this topic, but you know most of it already. Honestly!.

Bonding - . why bonding?. some atoms are very reluctant to combine with other atoms and exist in the air around us as

Bonding - . ionic and covalent. key terms 1. chemical formula– the combination of chemical symbols and subscripts to

1.6 Bonding - Ionic bonding a. recall and interpret evidence for the existence of ions, limited to physical properties of