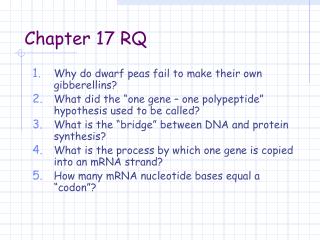 Chapter 17 RQ. Why do dwarf peas fail to make their own gibberellins? What did the “one gene – one polypeptide” hypothesis used to be called? What is the “bridge” between DNA and protein synthesis? What is the process by which one gene is copied into an mRNA strand? 2414 Calculus II Chapter 10.3 Polar Derivatives and Area - . to find the slope of a polar curve:. we use the product rule

Gibberellins - . history of discovery from a plant disease phenomenon. prior to world war ii japanese scientists were

Chapter 10 RQ - . what organelles are the site for photosynthesis? what are the pores in a leaf called through which