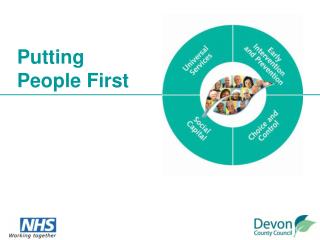 Putting People First. Devon’s vision…. Our Putting People First overall vision… Our aim is to build strong communities in which everyone can play an active role and take control of their lives. We want to promote independence and choice and provide support and protection to the most

Personalisation and People with Dementia - Workshop - . trevor adams, passionate dementia care. what makes a person, a

Putting the NIZ in perspective - . may 2012. map of allentown niz. map of downtown niz. finite area with limited future d

Putting The Past Behind - . the road to recovery (from a series by rick warren) part two. r.e.c.o.v.e.r.y. “do you want Putting people first in the company - . common(management)sense. human being is rational self interest capable of making

Promoting Positive Relationships and Abuse Identification and Prevention - . after review, please click on the “my