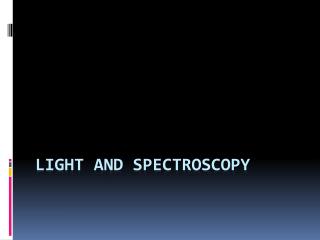 Light and spectroscopy. Demonstration. What information can we gather from the demo with the prism?. Demonstration. So, what is white light made out of???. Visible Spectrum. The colors that we can see that make up white light 400 – 700 nanometers A quick aside on wavelengths and light…

Spectroscopy - . spectroscopy. spectral analysis is probably the most important method for learning about the physics of

Spectroscopy - . atoms and light. atomic electron energy levels are a source of discrete photon energies. change from a

Spectroscopy The study of the interaction between matter and light - . the white light from stars can be separated out

Recent Results of Light Hadron Spectroscopy at BESIII - . yutie liang (on behalf of the besiii collaboration)

Spectroscopy - New units!. before we get started, we need to be aware of a couple of wavelength and frequency units we