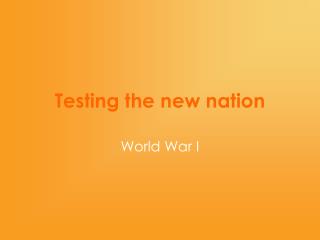 The South, the Civil War and Reconstruction - . south- cotton economy. cotton=basis of southern economy in the mid

REPORT- A Nation at Risk - . 1982 - large economic downturn 1983 - president reagan indicated that the the nation was at

Unit4 A Troubled Young Nation - . lessons and questions for unit 4. essential question. what is an american? how does

Nationalism and the Nation-State - . what is nationalism?. loyalty and devotion to a nation or ethnic group that places

AN EDUCATED AND INFORMED NATION: A KEY DEVELOPMENT PRIORITY SINCE INDEPENDENCE(VISION 2016) - . presented by: karen