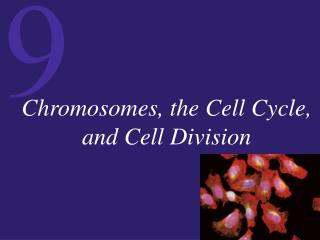 Chromosomes, the Cell Cycle, and Cell Division. Systems of Cell Reproduction. The continuity of life is based on the reproduction of cells. All the cells in a multicellular organism originate from a single cell (zygote). Cell division is necessary for: Reproduction Growth and Cell Division - . chromosomes. are made of dna each chromosome consists of sister chromatids attached at a centromere.

Cell Division and Mitosis - . chapter 10. 10.1 the cycle of cell growth and division: an overview. the products of

Cell Cycle - Honors biology chapter 8. cell cycle. just what does a cell do with all its time?. cell division. cell

Cell Cycle and Mitosis - . chromosomes. genetic information is passed from one generation to the next on chromosomes .

CELL DIVISION - . before it divides? what causes it to divide? what controls the division?. cell cycle. determines

Topic #78 and #79 Class Notes: Cell Cycle - . cell division. most body cells divide to increase their number through a

The Cell Cycle - . cell division. 2 daughter cells. here is what we’re going to learn about. parent cell. the stages of