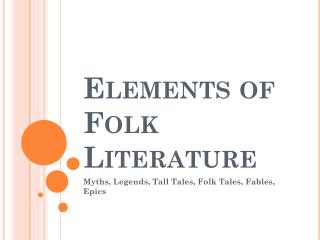 Elements of Folk Literature. Myths, Legends, Tall Tales, Folk Tales, Fables, Epics. Things to Know…. Oral tradition is the sharing of stories by word of mouth. Stories of oral tradition were created thousands of years ago. New details were added and changed as the stories were passed down.

Property Elements - . in this section we will look at the different property elements and how to identify and assess