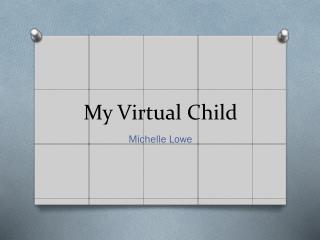 My child ... - My child. … knows exactly what he/ she wants to do professionally . go to parents / what does your child

My Virtual StrongBox - . nothing’s more important than trust. q: what is my virtual strongbox? a: the online answer to

My Virtual Museum - . of significant people and events, which have shaped the australian identity and heritage . content

Is My Child Gifted? - . should i refer them for pc?. created by holly hoffmaster , south douglas elementary

My Child Is Struggling!!!! - . what to focus on at home!!!!. what will my child be expected to know and master at the end

Is My Child Gifted? - . a parents’ resource to giftedness. what is meant by “giftedness”?. children identified as

It’s All About My Child - . important things to know about _______. workbook. partnership for people with

My Africa: Virtual Field Trip - . we are going to take a field trip to africa, a virtual one, without leaving our

It’s All About My Child - . important things to know about _______. workbook. things that people like and admire about

IS MY CHILD AT RISK? - . what all parents should know about childhood obesity. the problem. “for the first time in more

Help! My Child is Overwhelmed! - . just like their parents, our expectations are high for our students. we owe them the