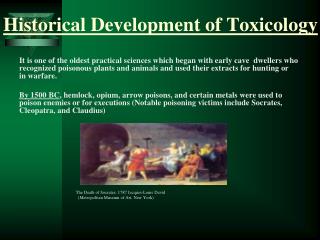 Historical Development of Toxicology. It is one of the oldest practical sciences which began with early cave dwellers who recognized poisonous plants and animals and used their extracts for hunting or in warfare. Historical Development of Humanities - What is humanities? a group of extensive disciplines (such as arts, art

HISTORICAL DEVELOPMENT OF SPORT - . recap : medieval era. activities were occasional due to limited time and energy

Historical Development - . ct scanners are categorized into several generations depending on the type of detectors,