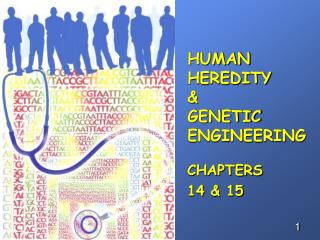 Human Heredity - . chapter 14-1 biology mr. hines. decades ago, biology was limited to the study of living things other

Genetic Engineering - . “amazing schemes within your genes”. what is genetic engineering?. moving small pieces of dna

Human Heredity - . some where on your notes…number 1 – 5. don’t let anyone see your answers….prizes will be given

Human Heredity - . 14-1. what does it mean to be human? compare our species to the rest of the world. humans have 46

Genetic Engineering - . genetic engineering. the process of making changes in the dna code of living organisms. can be

Human Heredity - . karyotypes. genome = the full set of genetic information that an organism carries in its dna to see

Genetic Engineering - . biotechnology &amp; recombinant dna technique. it is the methods scientist use to study and

GENETIC ENGINEERING - . sc b-4.9 exemplify ways that introduce new genetic characteristics into an organism or a

GENETIC ENGINEERING - . introduction. for thousands of years people have changed the characteristics of plants and