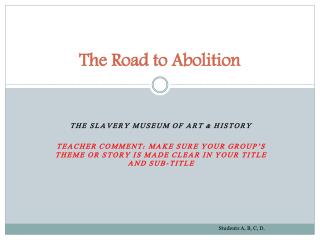 The Road to Abolition. The SLAVery Museum of Art & History Teacher comment: make sure your group’s theme or story is made clear in your title and sub-title. Students A, B, C, D. Life Before the Slave Trade. Head of an Oba, circa 16 th Century. Gradients - . gradient of a road. the gradient shows the steepness of the roads. on some inclined roads, we may find road