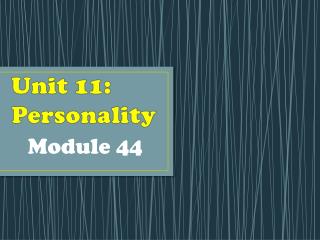 Unit 11: Personality. Module 44. Personality. Personality : an individual’s characteristic pattern of thinking, feeling, and acting. This unit is all about you! We emphasize you, the individual! We will look at two main theories: A. Psychoanalytic Theory B. Humanistic Approach. Let's Play Fonts! 2 [Typography Illustrated] - Fonts can tell more about a person that you know! they represent your

Chapter 5 Personality and Consumer Behavior - . what is personality. the inner psychological characteristics that both

Which adjectives might your friends use to describe your personality? - . happy brave funny pleasing