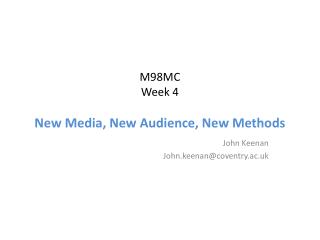 New Media: Twitter - . essential questions. what is twitter? how does it, as an institution in today’s media landscape,

New Media - . by jonathan french. what is new media?. i am going to focus on 2 aspects of new media. 1) some of the

New Media and Audience Empowerment - . “audience have the power”. audience: mindless or in control?. audience: