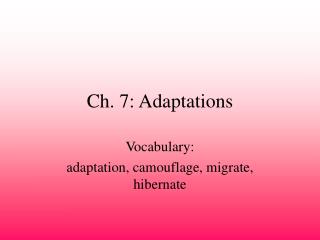 Ch. 7: Adaptations. Vocabulary: adaptation, camouflage, migrate, hibernate. Adaptations are features on a plant or animal that helps them to survive. Adaptations can be body parts. Poison Dart Frogs are brightly colored to warn predators that they are poisonous. Ch. 7: Dynamics - . updates. lab #1 writeup due thursday 3/8 a description of the writeup is included in the instructions

Ch. 7 Discussion - . reread pages 75-77. think about this: why this metaphor? what does it imply? what is the domino

Ch. 7 Extras - . here is the true reals. abbasid empire. took over umayyad caliphate and set up in baghdad in 750 ce

Ch 7 Loops - . alice has two control structures for controlling the repeated execution of statements loop while. text: a