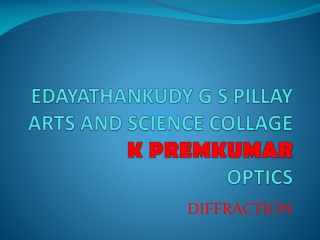 Give Your Science Teaching A(nother) Good Kick In The Arts Poetry, Music and Song in the Physics Lab - . presented by

An Introduction to Scratch ‘It’s All About Me’ My Interactive Collage - . today, we are working towards…. use a

Grade 8 Science Unit 2: Optics - . chapter 4 : many properties of light can be understood using a wave model of light.

Lasers and Optics - Nicholas dipreta. lasers and optics. optics. science of light how light behaves and interacts with

SURREAL COLLAGE instructions &amp; examples - . what does surreal mean?. surreal are real things in situations that

Collage and Montage - . collage and montage. collage - art made by gluing or pasting various materials such as

COLLAGE and MIXED MEDIA - . the marriage of line and shape. collage. from “coller” (fr.) = to paste, to stick, to