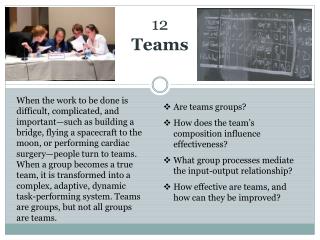 Working as Individuals and in Teams - . individual specific role or task solely responsible for work purpose, tasks given

LEADERSHIP TEAMS - . “a team is a group organized to work together to accomplish a set of objectives that cannot be

WORKING IN TEAMS - . teams. “a team is a group of people working toward a common goal.”. session objectives. identify

12 Teams - . when the goals people want to accomplish are so complex that they would overwhelm any individual’s