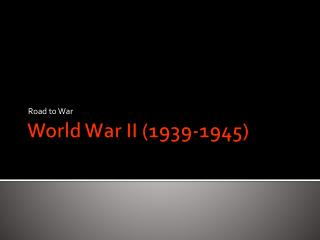 Road to War. World War II (1939-1945). Background. Totalitarianism Emerges. Setting the Stage. Throughout 1930’s… Americans escaped the depression into theatres For a dime or less these could slip into Hollywood fantasies & out of the Depression By end of the 30’s… New faces emerged The World at War, 1939–1945 - . the road to war the rise of fascism depression-era isolationism retreat from