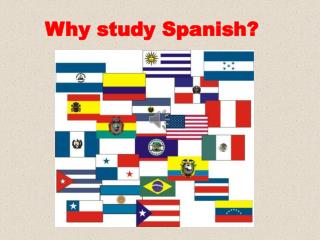 Benefits of Foreign Language Study - Inaword is a foreign language learning institute in chennai. we conduct classes for

Learn spanish - Want to enhance your travel experiences? spain provides the most exotic , beautiful places to visit . we

Learn spanish - Learning should be enjoyable. keeping this motto in mind , we have prepared our syllabus for our clients

Why study Languages? - . the importance of languages. how many languages are spoken throughout the world? 100 200 300

Spanish - . why learn spanish ?. spanish is one of the world’s most romantic languages. it is the official language of

Why Study Foreign Language? - . why choose spanish as the language of study?. why study a foreign language?. cognitive

Why Learn Spanish - . bienvenidos !. welcome to a new school year!. they all speak español !. why learn spanish?. some

Why Study Latin? - . improve your vocabulary ! approximately 67% of all english words come from latin. why study latin?.

Study Spanish this summer in Salamanca, SPAIN - . learn the language live the culture love the adventure. why study

Chinese, French or Spanish? - . which should i choose?. the world of chinese. why study chinese?. 1/5 of the world's