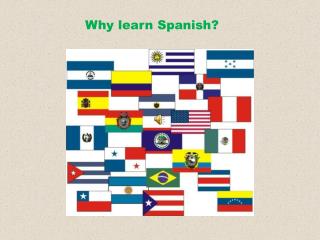 The Evolution of the Spanish Language - . what is language?. can be defined as: a system of communication either spoken

Spanish for Beginners I - . basic sounds. most vowel and consonants sounds are alike. el abecedario…alfabeto

Why Learn Spanish - . bienvenidos !. welcome to a new school year!. they all speak español !. why learn spanish?. some

Why learn Spanish? ¿ Por qué aprender español ? - . why do you want to learn spanish?. spanish is everywhere in the

Spanish settlements - . the start of permanent settlements in the new world. impact. the spanish are the 1 st to set up