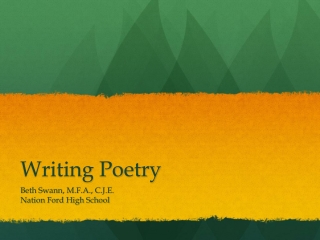 Writing Poetry. Beth Swann, M.F.A., C.J.E. Nation Ford High School. Writing…. … is supposed to evoke sensation in the reader— not the fact that it is raining, but the feeling of being rained upon.    ~E.L. Doctorow. Show, Don’t Tell. Writing Poetry - . the collection of english and russian poetry by the former and present day students of the

Writing Poetry - . in language arts class. poetry versus prose. prose is made up of sentences and paragraphs poetry is

Writing Poetry - . how can we creatively describe the world we live in ? . mystery poem. a yellow rain jacket that’s

Writing Poetry - . woo hoo!!!!. first poem: emotions poem. i will split you into five groups, arrange desks in a

Writing about Poetry - . “introduction to poetry”. i ask them to take a poem and hold it up to the light like a color

WRITING ABOUT POETRY - . reading a

Writing Haiku Poetry - . look carefully at one scene in nature and you will be able to produce over 20 haiku. -masaoka

Writing about Poetry - . hotel room 12 th floor. task. choose a poem which is strongly linked to a specific location.

Writing Structured Poetry - . 1. limerick. limericks are creative poems with 5 lines lines 1, 2, and 5 all rhyme with

Poetry Writing Types - . poetry. a type of literature that expresses ideas, feelings, or tells a story in a specific

Interested in Writing Poetry? - . a crash course in form, the spoken word tradition, and the visual tradition. this power

Technical Writing and Poetry - . post-test review. how to train your dragon: how to cheat a dragon’s curse (book