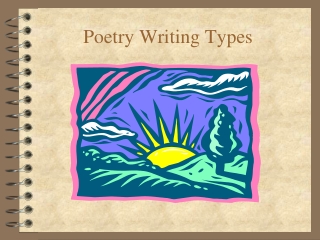 Poetry Writing Types. POETRY. A type of literature that expresses ideas, feelings, or tells a story in a specific form (usually using lines and stanzas). POET The poet is the author of the poem. SPEAKER The speaker of the poem is the “narrator” of the poem. POINT OF VIEW IN POETRY. Introduction to Poetry - . poetic devices &amp; terms. my beard by shel silverstein my beard grows to my toes , i

Poetry - . spring has sprung, the grass has riz, i wonder where the birdies is?. aims. to exemplify the role of poetry in

Poetry - . mrs. tuttle. directions. you are going to analyze theme and tone in poetry. examine the slides on this

Types of Writing - . so, what do i write?. people write for different reasons or purposes. these purposes can be grouped

The Power of Poetry - . maggie hsin-ying huang 12/18/2012. roadmap. why should i teach poetry? benefits difficulties how

Writing Poetry - . in language arts class. poetry versus prose. prose is made up of sentences and paragraphs poetry is

Reading, writing, Communicating - . grade 6, unit 4 poetry. essential questions. why is it possible to have different