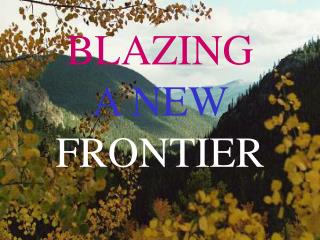 Frontier Fashions of the 1860s - . by: emily covert a nd jasmine sinclair. design of their clothes. they made their

Blazing Pens v2.0 - . how to play the game. everyone on your team has a turn at writing. everyone holds up their

LET’S PLAY BLAZING PENS! - . annie teacher. do you have english class today?. ew ahev mscui csals no rifdya. i have

Chapter 28: The New Frontier and the Great Society - . questions to consider. what issues and events helped kennedy win

!THE NEW FRONTIER! - . by:nadia/lauren /brooklyn. !fast fun facts!. did you know: pioneers did not have sugar. for

Changes on the Western Frontier - . farmers and the populist movement. words to know. populism- the movement of the

Changes on the Western Frontier - . chapter 5 . section 1: cultures clash on the prairie. the great plains - a grassland