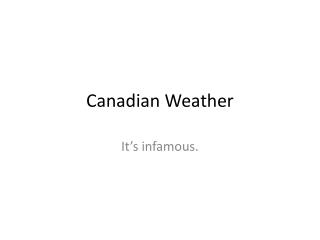 Canadian Weather. It’s infamous. Winter. Yes, it’s long and hard. It lasts from November to April ish . On January 23 rd , 2013 it was -28 degrees and -40 with the wind chill. On that day, Ottawa was the coldest c apital city in the world.