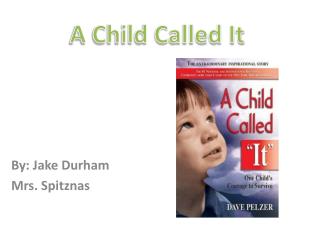 A Child Called It. By: Jake Durham Mrs. Spitznas. Characters. David Dave is a young boy that is verbally and physically abused by his mother. David is the main character of this book. . Cont. Parents A Child Called “It” - . dave pelzer. a child called “it”. chapter one: the rescue chapter two: good times chapter

A Child Called “It” - . written by: dave pelzer presented by: taylor blackmon. “one child’s courage to

David Pelzer “A Child called it” - . a child who stood tall, through a rough childhood. as a child. david james

“a child Called it” Dave J. Pelzer - . dave was abused when he was a young boy growing up. he has persevered growing

Are You Being Called To Serve a Child - So, come on down to you gotta believe's 10 week adopting older kids and youth

What was WWI called before it was called WWI? - . why is world war i called w.w.i?. the great war “the war to end all

A Game Called - . piggle. games. http://www.opencourtresources.com. have you played any word games before?. have you made

Why It is Called “Karn’s Algorithm” - . craig partridge bbn technologies. fall 1986. after doing dns work for most

It Takes A Family To Raise A Child - . pastor tim roten children’s pastor. disclaimer. i do not come up with sermons

A child pays it forward to a soldier - "dear soldier — my dad was a soldier. he's in heaven now. i found 20

A Wonder Called Sleep - . our body and brain recover from fatigue after a good sleep . body becomes alert and active.