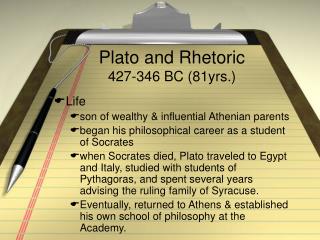 Plato and Rhetoric 427-346 BC (81yrs.). Life son of wealthy & influential Athenian parents began his philosophical career as a student of Socrates

‘Waxing’ Rhetoric - . a student’s guide to all things rhetorical. what is rhetoric anyways?. rhetoric is the art of

Analyzing the RHETORIC of Advertisements - What you know you can't explain, but you feel it. you've felt it your entire

Rhetoric: for the win - . “knowledge of the other arts has only to do with some sort of external action, as of the

The Apology - . philosophy 1 spring, 2002 g. j. mattey. socrates on trial. socrates was defending himself against two

Rhetoric in our Lives - . definition of rhetoric: the art humans use to process messages sent and received.

Lesson Ten - . the trial that rocked the world. objectives of teaching. to comprehend the whole text to lean and master