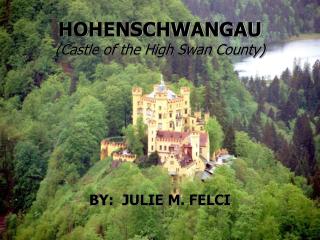 HOHENSCHWANGAU (Castle of the High Swan County). BY: JULIE M. FELCI. Map of Hohenschwangau. History of Hohenschwangau. The castle is located in the German village of Schwangau in southwestern Bavaria. King Maximilian II. November 28, 1811 - March 10, 1864. King of Bavaria from 1848 – 1864. German Cultural Identity: The Castles of Mad Ludwig II - . anthea rokop. the castles. the rich history of these three

Notes From the Underground (1864) by Fyodor Dostoevsky - . part i and ii of ii. fyodor mikhaylovich dostoyevsky

Paul Klee “The Castle and the Sun”, 1928 - Castles with shapes and color by grade 1, oliver ellsworth school this

Thea Stilton And the secret of the old castle - . vanessa xerri 5 tulips. i love to read a lot and a book that i enjoyed

The Trumpet of the Swan - . book by e. b white pictures by edward frascino report by ethan swim. genre. the story is

The Swan Lake - . presented by alfredo medina and selene juarez. what is the plot of swan