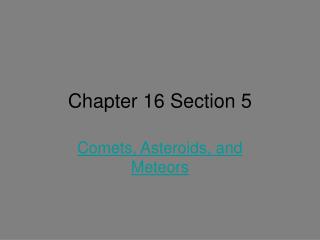 Chapter 16 Section 5. Comets, Asteroids, and Meteors. Ch16 S5 Essential Questions. What are the characteristics of comets? Where are most asteroids found? 3. What are meteoroids and how do they form?. Comets. Farther our in space, near the edge of the solar system a huge cloud formed. Chapter 16 Section 4 - . evidence of evolution. do now. read the following passage on earth ’ s history of life and

Chapter 16 Section 3 - . behavior of gases. pressure. gas particles are constantly moving and colliding, which results in

CHAPTER 16 SECTION 1 - . russia and the western republics. history of expansion. vikings settled between the

Chapter 16 Section 2 - . properties of fluids. buoyancy. fluid = a liquid or gas buoyancy = the ability of a fluid (a