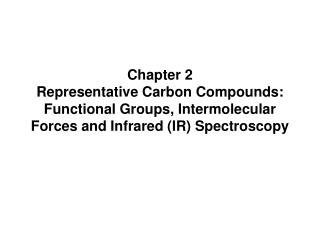 Infrared Spectroscopy - . gives information about the functional groups in a molecule. infrared spectroscopy. region of

Compounds of Carbon - . chapter 8. why is carbon important?. carbon makes up over 90% of all chemical compounds they form

The Chemistry of Life Macromolecules - . macromolecules or organic compounds make up the body. the backbone of these

Intermolecular Forces 2 - . mr. tsigaridis. intermolecular forces. if you recall from the last lesson, we discussed how

Section 5.5—Intermolecular Forces - . intra- versus inter-molecular forces. so far this chapter has been discussing

Infrared Spectroscopy - . the structure of new compounds that are isolated from natural sources or prepared in the lab

CARBON COMPOUNDS - . organic compounds. the compounds of carbon( except the oxides of carbon, carbonates, hydrogen