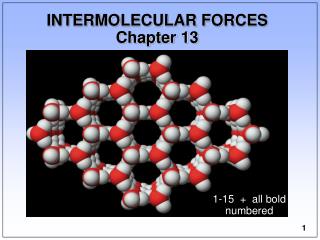 INTERMOLECULAR FORCES Chapter 13. 1-15 + all bold numbered problems. CHAPTER 13. This chapter examines the forces of attraction between molecules, or atoms, that are responsible for forming the liquid and solid states as a function of temperature. Chapter 13 Intermolecular Forces, Liquids, and Solids - . which of the following molecules can hydrogen bond with

Chapter 11 Intermolecular Forces - . a phase is a homogeneous part of the system in contact with other parts of the

Intermolecular forces - . liquids and solids chapter 11. liquids vs. solids. physical properties are due to

Intermolecular Forces - . what holds a liquid or solid together?. in ionic compounds, all atoms are equally bonded

Intermolecular forces - Questions. why do some solids dissolve in water but others do not? why are some substances gases