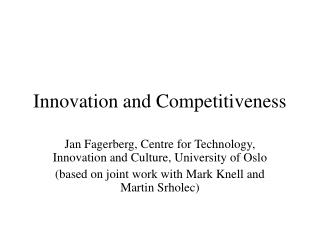 Innovation and Competitiveness. Jan Fagerberg, Centre for Technology, Innovation and Culture , University of Oslo (based on joint work with Mark Knell and Martin Srholec ). What is competitiveness? . Countries and firms Growth and trade – the external constraint Is Demographic Diversity the Key to Metropolitan and Micropolitan Competitiveness in Florida? - August 2013 . is

Innovation in Retail - . shane daly head of retailer services may 6 th , 2014. innovation in retail. success in