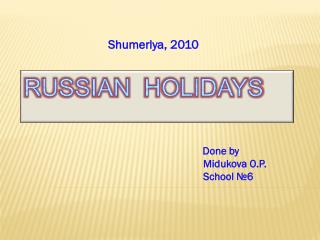 The Russian Revolution - . the roots of revolution. one of the most important consequences of wwi was the russian

The Russian Campaign - . monday october 21. the russian campaign. russia was napoleon’s ally (friend) and had agreed to

The Russian Revolution - By andrew alexandre. the russian revolution.

Russian in usa - . the russian on usa. the first russian in usa came on 1747 when fur trades came to alaska a large group

THE RUSSIAN REVOLUTION - . watch this video. https://www.youtube.com/watch?v=kzbho6asboc. russian empire. how did world

Tips to Learn Russian Language - The russia is a powerful and most no excuse to avoid using the languages in russian.the