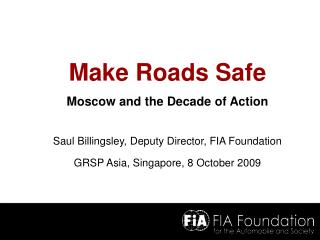 Road Safety in Africa Presentation by: David Ward Director General of the FIA Foundation - David njoroge member of the

Traffic Psychology, Road Safety, and Health: The Decade of Action - . the united nations: decade of action for road

DECADE OF ACTION : PROGRAMS FOR THE DEPARTMENT OF TRANSPORT - . department of transport. “a transport sector that is