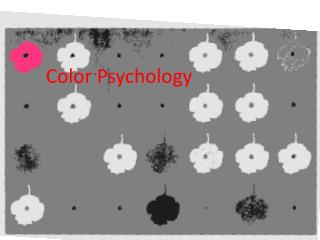 Color - . it’s magic!. color experiment. work with a partner complete the handout. color. a ray of light is the source

Color - . background. what is color?. aspect of vision physical reaction of the eye and the automatic interpretive

Color - . color. when talking about color we use the terms ‘hue’, ‘value’ and ‘brightness’. hue: refers to

Color - . dispersion. as light waves pass from one medium to another (air → glass), the speed of the wave will change

Color - . primary colors. red, yellow, and blue can not be made by mixing other colors can be used to make other colors.

Color In Design/ Intro to color Psychology - . color preferences: colors individuals gravitate towards. based on

Color Psychology and Informational Color - . how would you feel if you spent time in this room?. what kinds of

Psychology of Color - . valerie demartino inbs 510 november 4, 2002. psychology of color. importance of color on the

10 Tips on Psychology Color in Web - The colors are essential elements for web design. different colors affect mood and