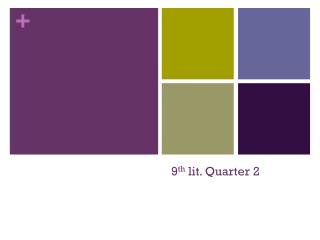 9. The Ones Who Walk Away from Omelas - . (edited) variations on a theme by william james ursula le guin. objectives of

The Phillis Wheatley Tall Tale - . by: maliyah, ashia, destiny. captured. when she was 4 years old she was captured on a

Welcome to Klein Oak! CLASS OF 2017 - . focus on the future!. » prepare for: high school college the world of work

Symbolism in The Scarlet Ibis - . ms. burton. what is a symbol?. symbol: a word or object that stands for another word or

Snatching Defeat from the Jaws of Victory - . the watergate scandal. is nixon a crook?. nixon, though extremely popular,

THE FOUR NOBLE TRUTHS By: Meena Gul and Onaiza Khan - . they are an important aspect of the buddha’s teachings. lead to

Today’s Agenda… - . get your clickers bellringer: what is the difference between a solstice and an equinox? review