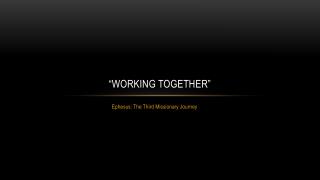 Working with Files - . welcome, brave adventurer!. this program will allow you to learn about working with files on a

Working cast with removable die - . the working (master) cast is the replica of the prepared teeth, ridge areas, and

Compact toolkit: working draft - . working draft. december 22, 2010. confidential and proprietary any use of this

Chapter 6: Therapist – Working in the Here and Now - . the theory and practice of group psychotherapy irvin yalom,

Working With PHP - . david lash module 1 getting started. objectives. to understand what php is what is html how php