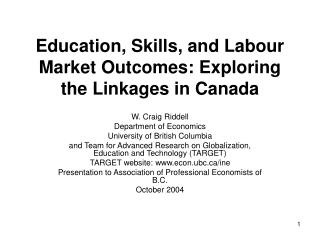 Labour Market Situation in Albania - . may 2005. the passage of albania on the market economy at the beginning of

Poverty Dynamics and the Linkages to Labour Market and Welfare Reforms in Urban China - . dr heather zhang, university of

Unemployment and the Labour Market - . the labour market. sellers the sellers in this market are those who decide to

Getting Our Act Together on Skills Issues - . presentation at the labour market information working group conference