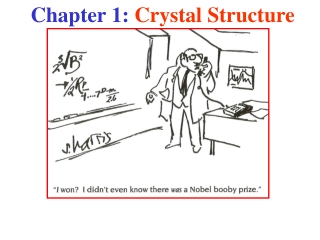 Quartz Crystal Training Seminar - . what is a crystal?. a class of materials arranged in a definite, geometric pattern in

Chapter 4 Crystal Defects and Noncrystalline Structure–Imperfection - . me 2105 – dr. lindeke. in our pervious

Chapter 1 The Crystal Structure of Solids - . describe three classifications of solids—amorphous, polycrystalline, and

§2.4 Crystal Structure and Complex Lattice - . Ⅰ.crystal structure is the real arrangement of atom in crystals crystal

Crystal Structure - . link. the structure. the expression of a mineral’s internal arrangement of atoms the structures

Investigation of the crystal structure of cytochrome ba 3 oxidase - . by caroline christian based on the paper by

Concepts of Crystal Geometry - . x-ray diffraction analysis shows that the atoms in a metal crystal are arranged in a

Chapter 3 Crystal Geometry and Structure Determination - “there are two things to aim at in life: first, to get what