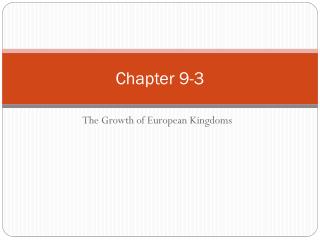 Chapter 9-3. The Growth of European Kingdoms. Objectives. Explain England and France in the High Ages List important English and French Rulers Analyze the impact of the Magna Carta and changes in government. England in the High Middle Ages. Angles and Saxons invaded in the fifth century.

Chapter 9 - . using the genetic code. 9.1 introduction. the sequence of a coding strand of dna is read in the direction

Chapter 9 - . journalizing purchases and cash payments. 24. corporations. corporation – an organization with the legal

Chapter 9-3 From Genomes to Proteomes - Lehninger principles of biochemistry, fourth edition, 2005. chapter 9-3 from

Chapter 9 Homework - . exercise 9-3. prepare the journal entries required in the gca and gltl accounts of percy county to

Chapter 9 - . positioning decisions. positioning is the act of designing the company’s offering and image to occupy a

Chapter 9 Properties and Applications of the Competitive Model - . no more good must be attempted than the public can

Chapter 9. Volume Studies &amp; Characteristics - . chapter objectives: the student will be able to (we spend 2

Chapter 9 Review Trigonometry - . rules. take 3 minutes to silently complete the questions on your own. take 2 minutes to