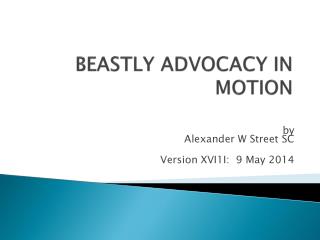 BEASTLY ADVOCACY IN MOTION. by Alexander W Street SC Version XVI1I: 9 May 2014. Table of Contents. A. Nature of the Beast B. When is the Beast unleashed? C. Recognising the Beast D. Training the Beast E. The hallmarks of the Beast F. Know the Beast

Chapter 5 Projectile motion - . 1. recall: a projectile is an object only acted upon by gravity. 2. chapter 4: [linear