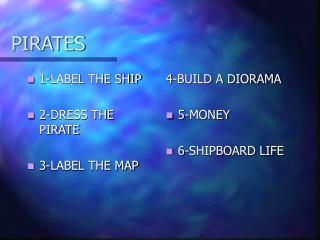 1-LABEL THE SHIP 2-DRESS THE PIRATE 3-LABEL THE MAP. 4-BUILD A DIORAMA 5-MONEY 6-SHIPBOARD LIFE. PIRATES. The Jolly Roger Flies!. A brief history of piracy. What do you know about pirates?. Did pirates have parrots? Sure. Monkeys were popular, too!

Pirates in the Bathroom! - . song by: joe thompson pictures collected from microsoft clip art. the pirates have captured

Pirates of The Caribbean - . pirates of the caribbean is an interesting story because it depicts pirates somewhat

Pirates Past Noon Vocabulary - . by cole and sophia. a raid is a surprise attack!. to rescue is to save from harm. Pirates! The Musical - . dear students and parents of 5 th

Pirates - . pirates. one of the most successful pirates of all time was welshman bartholomew roberts. he captured around