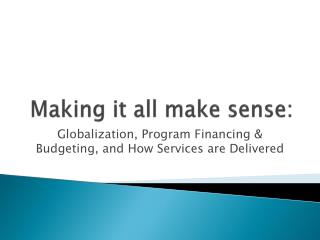 Making it all make sense:. Globalization, Program Financing & Budgeting, and How Services are Delivered. The Global Economy. Everything (policy, economic behavior, poverty, immigration etc) is inter-connected. CONTEXT FOR ORGANIZATION THEORY - . key questions to answer theory to practice. what do i need to know about this org?

Making Sense Out of Sensors - . jim halderman dayton, ohio. we started communicating by writing on the cave walls. as the

Topic 5: sense - . introduction to semantics. definition . the sense of an expression is its indispensable hard core of

Making Sense of Federal Budget and Tax Trends: A Macro-Level Look at What NPO’s Need to Know - . prepared by omb watch