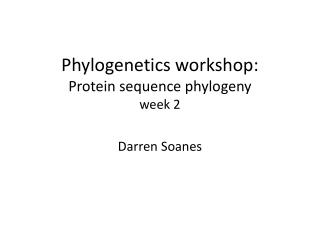 Phylogeny Review - . district ap biology session. evolution. is the change in a population over time lamarck was the

Lesson 3: Phylogeny &amp; Modern Taxonomy - . recall that the fundamental unit of biodiversity is the species

PAML (codeml) the basic model - . sites versus branches. you can determine omega for the whole dataset; however, usually

Phylogenetics - . alexei drummond. friday quiz : how many rooted binary trees having 20 labeled terminal nodes are there?

Molecular Phylogenetics - . the tree of life image that appeared in darwin’s on the origin of species by natural